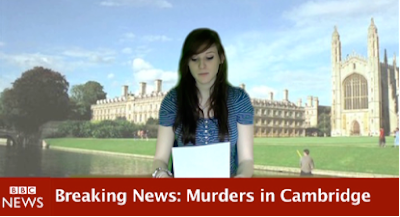 For the majority of this lesson we went to the green room and filmed our news report. We pre- wrote a script and I read off of the sheet of paper. We thought this would be identified to a normal new report as they often have pieces of paper in front of them. When we finished filming we returned to the classroom and uploaded the footage to Final Cut Express and used ECG to put an image of Cambridge from google behind the news reporter; this would be relevant to the news report. We got an image of the BBC News logo off of google also and minimised it it to fit in the corner of the report. We then added a band across the bottom of the screen with a headline to make it look more professional. We did all of this footage so we would be able to use it as the main narrative in our actual footage and storyline.
Jazmine Butler
Posted by Long Road Thriller 12 at 11:14