We got given a clip from the film Point Break that had no sounds. We layered sounds effects (diegetic sound) and a soundtrack ( non-diegetic sound) to the final cut project, cutting and fading the sounds to make it fit to the clip. We found this task relatively easy given the effects and time that we were. What also helped in this task was that we already knew the skills that would be involved in completing this task as we have used this software before. When adding the sound effects we found that there weren't some sounds that we wanted to place into our clip. From this we learnt that when we go out to film our thriller sequence we will also have to film all of our sound effects to ensure that we have them all for the editing process. 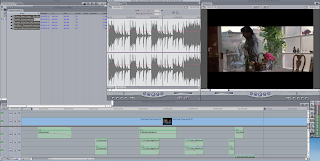