Snake Eyes is a film by Brian De Palma and was made in 1998 starring Nicholas Cage (Ricky Santoro) and Carla Gugino (Julia Costello).

The film follows Ricky Santoro a corrupt Atlantic City cop. The night of the big fight he gets mixed up in the assassination of the Secretary of Defence which involved his best friend Commander Kevin Dunne played by Gary Sinise. In a complex web of stories and false paths involving Julia Costello, Ricky Santoro soon uncovers the conspiracy behind the killing.

Some enigmas that are set up in this opening sequence are is the storm relevant? is the fight the main focus of the film? are the fighters going to be important characters? why is there so much security?

Some conventions of the thriller genre that are set up in the opening sequence are a narrative pattern of establishing enigmas which the viewer expects to be resolved, extraordinary events happening in ordinary situations, protagonist with a flaw, a series of important enigmas built up in the opening 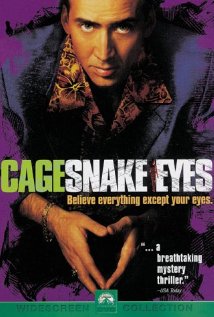